Examples of Beliefs Essays Below

Sample Essay on Witchcraft among the Azande (20th century) 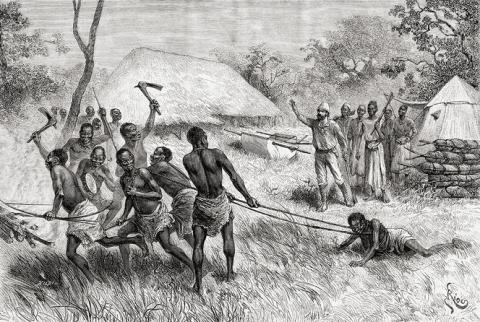 The Azande people hail from the northwestern side of Sudan. The name Azande is usually translated to mean a people who own large tracts of land. The Azande came to own huge lands through conquests which was brought about by an individual who had gained much wisdom and power by using his clans witchcraft and was able to use that wisdom and power to marshal all clans of the Zande people to form a formidable group. Traditionally the Azande people lived along riverbanks but because of tsetse fly outbreak they were relocated to condensed settlement areas where they lived with constant fear of the potency of their neighbor’s witchcraft.

This relocation has over the years contributed to the erosion of the Azande culture including some knowledge about witchcraft, sorcery and magic. The Azande traditional home along the river was adequately forested and they had a great collection of indigenous tree species that have since been lost because of aggressive lumbering by the colonialists. The presence of this large natural fauna base could be used to some extent to explain the Azande people system of natural religion that would explain the prevalence of witchcraft in their society.

The Azande had a system of multiple metaphysical beings that included unborn spirits, dead people's spirits and ancestors. Ritual sites, adequately named shrines, that served a specific set of the unseen were social institutions that were to be revered and respected. Kapferer (2002) suggested that every unseen, or most of them anyway, had cultic following and these cults possessed some knowledge of nature that could either be beneficial to society or destructive. The random distribution of that knowledge created a culture of primitivism that necessitated the pragmatic use of that knowledge to settle personal conflicts and problems. For most of these traditional societies death, sickness and individual’s mishaps including accidents and unluckiness were the direct result of witchcraft. Oftentimes people with the greatest grudge against victims were accused of witchcraft.

According to Evans-Pritchard (1937) the Azande people in Sudan explained every misfortune by connecting some empirical event to specific spiritual elements such as witchcraft and sorcery. On regular occasions the Azande will consult clan oracles to seek guidance for a wide range of issues including taking a wife, building a house, planning a raid, and so on. The most powerful oracle is the benge and it is a male oracle so women have nothing to do with it. Benge poison is expensive and difficult to acquire, it can be used to frustrate the magic of other people’s witchcraft. Without the Benge oracle most of community will be destroyed by uncontrolled use of witchcraft.

The relative importance of this oracle serves to maintain social classes because the wealthy can use its potency to protect their family and wealth at the detriment of other people who may not be able to afford its services. During benge rituals a fowl is used to take response from the oracle. A set of questions are asked after some poison from the bewitched person is administered to the fowl. The kinsman that inferred from the oracle will usually say something that follows, “If this is true, benge spare the fowl” or “If this is true, benge kill the fowl.” The Benge oracle is associated to Mbori, who is the Supreme Being.

Other oracles can be used by everyone irrespective of the wealth of the seeker. One such oracle is called the ‘termite’ oracle and it involves inserting a twig into a termite mound and checking up on it the next morning. Usually it is believed that the oracle will answer by either an eaten twig or a not eaten twig. The ‘rubbing-board oracle’ is another oracle whose reliability is usually contestable, much like the termite oracle.

Read also about Genocide in Sudan

Evans-Pritchard (1937) posits that witchcraft transcends the scientific grounds of rationality with regard to cause and effect. The substance of witchcraft is integrated into the spirit-soul of the organism that possesses magical powers. Among the Azande, witchcraft is transferred from one generation to the next but within one clan. it was the responsibility of the mothers to pass witchcraft knowledge to their daughters while the fathers did the same with the sons. Witchcraft cannot be transferred in a cross inheritance system. Male magic was categorically separated from female magic. This meant that women could not take part in male magic rituals just as the males could not interfere in female rituals. To reinforce this fact, community duties were totally separated such that men could not do what women did and vice versa.

Why the Azande people believe in Witchcraft?

According to Kapferer (2002) in the traditional Azande society the practice of witchcraft brings about misfortune both on a community and individual level. Witchcraft was used to settle personal scores, conflicts, or disagreements. Witchcraft was also applied in restoring social relations because it was used to air grievances and lamentations. Among the Azande people, people who practiced witchcraft that brought about misfortune and calamity faced severe punishment that involved voluntary purging by the witch himself or herself. The Azande people believed that unsuccessful people will use witchcraft to derail the success of the already successful.

Because of this it was usually the vulnerable members of society that were accused of witchcraft. For these people, witchcraft serves to control society considering that arbitration process is judicial and charges are considered as attack on an entire clan and not just an individual. Further the fact that knowing the repercussions to expect by harming others are severe people are likely to restrain from harming others. In this regard witchcraft can be used as a crime deterrence tool and also as an effective sanction against socially disproved behavior. Witchcraft is used to maintain social, political and economic balance.

Evans-Pritchard (1937) study revealed the Azande people as having a hierarchical political system which are manned from the top by the Chief who has deputies who act as local governors, army commanders, arbitrators and so on. Position is granted to people who come from clans that have strong witchcraft which is supposed to be the reason for his success. In most cases witches are unintentionally dangerous, and sometimes they might not even know their witchcraft potency, and their magic will be released by pent up jealousies or resentment. Because of this it is usually difficult to accuse any one person of witchcraft. However when it is ascertained that the magic was intended to harm constituting malice before the fact, the witch would have to be purged.

Uncertainty is a universal aspect of human life. The Azande, like every other society, faced many uncertain about many things in life including the future, afterlife, creation, and other small life's inconsistencies. Uncertainty brings about irregularities in the social life of man and these irregularities necessitate the need for law. We create laws to protect ourselves against life's uncertainties. Laws are intended to govern our relationships with each other and with nature to ensure that the relationship does not bring about calamitous consequences. When we cannot give meaning to an event we acknowledge the presence of the unseen. The Azande devised laws to govern their relationships not only among themselves and nature but also the unseen.

They thought that the unseen can either harm or protect them depending on how they are manipulated by their earthly handlers. The Azande system of interpreting reality and ascribing that reality to some spiritual element is a psychological representation brought on by social forces present among all people.

The Azande use witchcraft to block what the mind cannot interpret because of the rules that the society has laid down. The Azande people use a variety of methods that eliminate inconsistent answer so that what is left is the most probable answer. In this way the rationalization process of the Azande would be aiming for scientific verification by elimination method. Therefore we can say most resolutions of conflicts among the Azande were just, but not all. Spiritual systems such as witchcraft have the capacity to provide explanations for events that would ordinarily be unexplainable. Among the Azande witchcraft, and not theism, is the instigator of morality. These people have devised a way in which the supernatural and the mundane are intertwined to conceive a sense that witchcraft is part of everyday life.

Evans-Pritchard, E. (1937). Witchcraft, Oracles and Magic among the Azande. London: Oxford Clarendon Press.
Kapferer, B. (2002). "Introduction: outside all reason: magic, sorcery and epistemology in anthropology" Social Analysis. The International Journal of Social and Cultural Practice, 46(3), 1-30.