Are you in High School, College, Masters, Bachelors or Ph.D and need someone to help write your paper? All you need is to ask for research paper help written by a specialist in your academic field. When you buy an essay online from us, we offer you an original, nil plagiarized and unique paper written by a dedicated writer who is PhD or Masters qualified. MyEssayServices.com is an experienced service with over 9 years experience having delivered over 83,000 essays over the years.

Examples of Poem Essays Below 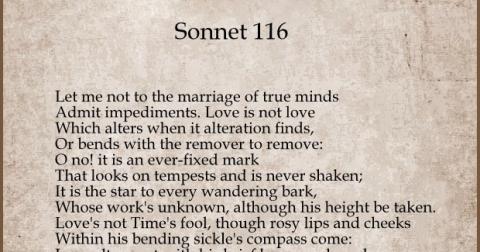 Sonnet 116 makes an attempt to define love, and it does this by describing what love is and what it is not. In the first quarter, the speaker in the poem argues that love is the marriage of true and dedicated minds. It is perfect and it does not change despite time. The speaker goes ahead and argues that love does not in any way admit impediments and does not change even when the loved one changes. It in the second quatrain that the speaker shows what love is by using a metaphor. He argues that love is like a guiding star to lost ships and is never susceptible to any storms. The poem can therefore, be said to essentially present the extreme ideal of romantic love; a love that never changes, never fades and it outlasts death and it never at any given time admits flaw. The speaker continues to argue that if love is impermanent, changing and mortal then there is no man in the world that has ever loved.

‘The love of my life’ by Coraghessan Boyle describes a love affair that exists between high school students China and Jeremy. This love affair ends in tragedy when the girl, China, gives birth in a motel room and the couples decide to abandon the baby to die in the dustbin. China had refused to have an abortion and this led to wars between Jeremy and her. The wars escalated to fights and hate started to enter into the relationship. When China gave birth to the child, Jeremy took the child and threw it away in the dustbin. After throwing the child Jeremy returned China to the dormitory where he was arrested by the police. However, despite everything China did, she never hated Jeremy. In fact, when Jeremy was arrested, China was devastated and she continued to daydream of Jeremy. This was because according to her, Jeremy was the love of her life, and every time she closed her eyes and clung to him according to her it was all that mattered.

The story ‘love of my life’ can be described as the true love that is described by sonnet 116. This is because despite everything, Jeremy and China still loved each other. China never saw any fault in the person that was Jeremy and Jeremy never at any time did not admit any fault. For this reason, it can be said that there is nothing that changed by throwing away the baby. This was because the love that existed between the two never changed, they never admitted fault to any wrong doing and they loved each other unconditionally despite things changing.

‘Where are you going, where have you been?’ is a short story by Joyce Oates. The protagonist is named Connie and is often preoccupied with her appearance and for this she gets scolding from her mother for always admiring herself in the mirror. Connie is unlike June, June is diligent and responsible. She often saves money, and works as a secretary at Connie’s school. However, Connie spends almost all her time daydreaming. Connie meets Eddie and during their dinner she notices one rich man with a convertible that shows interest in her. Connie often avoids prying questions in regards to the boy that she often meets. However, when her parents and sister leaves, the rich man comes to her house. The rich man declares love for Connie and argues that he has a lot of love for her. Arnold blackmails Connie and puts up her in a car by force and goes away with him.

Arnold’s love according to Sonnet 116 is never fading. His love outlasts death and it does not in any admit flaw. Although Connie decides to refuse the love of Arnold, Arnold never gives up. His love never fades and this is the reason as to why he decided to take away Connie with her. However, Sonnet 116 does not describe what happens when one is in love and the other is not. This is the case with Connie and Arnold, Connie is not in love with Arnold. However, Arnold loves Connie with all his love and even goes a step ahead to find out all about her.

Read also the short story Hills like a white elephant

The short story ‘what we talk about when we talk about love’ written by Raymond Carver introduces Mel McGinnis who is a cardiologist. He has strong opinions regarding love. However, it is imperative to understand that McGinnis does not know anything about love. Mel believes that love is spiritual. Terri argues that there was a man who loved her until she wanted to kill her.
However, according to Sonnet 116 that is not true love, because by killing it means that love is mortal. Further, this also means that the love that exists between the two is not true because it is susceptible to time. The relationship ended and the love ended. This therefore, means that according to sonnet 116 the love is not true and never existed.

References
Boyle, T C. T.c. Boyle Stories Ii: The Collected Stories of T. Coraghessan Boyle. , 2013. Internet resource.
Oates, Joyce C, and Elaine Showalter. "where Are You Going, Where Have You Been?". New Brunswick, NJ: Rutgers Univ. Press, 1994. Print.
Carver, Raymond. What We Talk About When We Talk About Love. London: Vintage Classic, 2009. Print.

In the poetics, Aristotle was able to describe a spooky coincidence supposed to have happened in lifetime. He argued that an Argive that was named Mitys was supposedly murdered and shortly thereafter a statue of the man was fell on his murderer when the wrongdoer was at the time looking at her. Such events, Aristotle argues came out of pure chance, and coincidence. He went ahead to argue that sometimes in life, the fortunes and fate of people might be shaped by coincidence. This is the same case with the Princess of Cleves, her actions is shaped by misapprehension and chance. In the broadest sense of the words, chance and misapprehension can be described as instances where there is simultaneity between people that leads to the intersection of ideas, events, space, time and objects. More specifically coincidence can be described as the lack of a cause that exists behind the many intersections. Instead, what confronts the situation is an operation of chance. This exactly what happens to the Princess of Cleves, it is chance and misapprehension that shape her actions and consequently her fate. This paper is going to discuss how chance and misapprehension had a hand in the shaping of action in the life of the princess of Cleves.

The first misapprehension is that the Duke of Nemours is a bad man and does not love her. Princess of Cleves believes that the Duke of Nemours has a lot of relationships and affairs with other women. This comes from the fact that there was a scandal in the court. The start of this scandal was purely coincidental and was a matter of chance. There was a letter that was misplaced and it had come from a spurned mistress to her paramour. However, this letter unfortunately (or is it by chance) was discovered in the dressing rooms of one of the estates. It is imperative to understand the court system at the time. This was a major scandal as a mistress had been unearthed and therefore, everyone in the court was trying to make sure that they find who sent the letter. A scandal was hugely looked for in the courts at the time and consequently, everyone had known about the letter. The letter was written to the Princess of Cleves uncle who was referred to as the Vidame de Chatres. Vidame de Chatres had his share of affairs and another scandal at the court would have brought him great dishonor. Therefore, by coincidence he went to the Duke de Nemours who at the time was described as being one of the most gallant and handsome men in all of France (Madame de Lafayette 23). He was brave and was deeply in love with Princess de Cleves. He begged the Duke de Nemours to accept responsibility for the letter because his image was not yet tarnished and he had nothing to lose. The Duke de Nemours took ownership of the letter, however, with time again by chance the letter ended up in the possession of the princess de Cleves.

Another misapprehension that the Princess de Cleves holds which makes her to make several decisions and actions is the fact that she believes that his husband had the correct information regarding their relationship with Duke de Nemours. However, this is not the case. When the Prince de Cleves discerns that indeed his wife might be in love with another man, he does his investigations and tricks her until she reveals that indeed it is true and even goes further to reveal the identity of the man (Madame de Lafayette 39). The Prince de Cleves sends a servant to the Duke de Nemours, and from what the servant tells him, he goes on to believe that indeed the princess de Cleves had been unfaithful with more than her emotions. However, this is not the case, and Princess de Cleves is not informed about these happenings.

In conclusion, chance and Misapprehension play a very big role in the life of Princess de Cleves. The letter that she has in her possession that she believes belonged to Duke de Nemours was not actually his but rather belonged to her uncle. Further, there is also a misapprehension in that the Prince de Cleves believes that his wife had an intimate relationship with the Duke de Nemours. However, this is not the case. In fact, it can be argued that it is chance and misapprehension that eventually leads the Princess de Cleves into a convent.

Back to top
Short Stories
Sonnet
Poem
Buy a Sonnet
‘The love of my life’ by Coraghessan Boyle
‘Where are you going
Write a Sonnet
where have you been?’ by Joyce Oates
Research on Poems
Communication Research Papers
Literature Research Papers